This section goes into the details on how your data is sent to and stored in Speckle. If you're new to Speckle or need a refresher on the concepts we've introduced in v2, this is a great place to start!

Whenever we mention the word data, or objects or elements etc, we're always referring to the same thing. This could be CAD geometry, BIM elements (geometry+data) or pure data (text, numbers, etc...).

The main data structure in Speckle is the stream. A stream is simply a collection of objects with some helpful additional information to manage and retrieve them. Each stream is assigned a generated streamId which uniquely identifies the stream on a server. You can give a stream a name and description to help organise your streams. A stream also lets you manage permissions: it has a list of collaborators including an owner and additional reviewers and contributors which the owner has chosen to share the stream with.

# What do they contain?

A stream can contain anything from a handful of objects to a whole building model - it is entirely up to you! You are free to add as much or as little data to a single stream and create as many streams as you'd like. Some examples of what might be contained within a stream are

A stream also contains further options for managing your data by way of branches and commits. We will learn more about these in the following sections.

There are two stream-level visibility options: Public and Private.

Collaborators can have one of three default roles:

Streams are the main mechanism by which data is shared between people and applications. For example, you could create a stream in Revit and send that data to your server. Then, any of your colleagues with access to that stream could view the data in the browser or receive the data in Grasshopper, Rhino, Revit, etc. If any of your colleagues have collaborator access, they are also free to make their own changes and send their changes to the stream. You can then receive those changes from the stream in your original model to see the changes reflected.

Branches give you an extra layer of organisation within a stream. All streams start with a single default branch called main. If you would like to "branch" off from this main branch and work on multiple different versions of your data in parallel or if you want to segment separate parts of your data from each other, that is where branches come in. 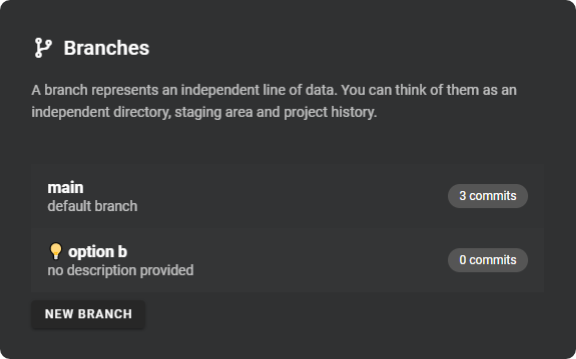 You can add as many additional branches to your streams as you would like. Some connectors and Speckle web give you the option of creating new branches and switching between them.

Let's say you have a very large model you want to add to a single stream, but your collaborators from different disciplines don't want to receive the whole model every time. You could split the model up into different branches: structural, mep, archi.

Perhaps you have a complex model that encompasses a site with multiple separate buildings. You could still contain the whole model in a single stream, but create a separate branch for each building: building A, building B, building C.

Maybe you're working on a smaller scale and your stream focusses on a single facade. However, you would like to present a couple different options to the client. The stream could be split into option A, option B, and option C which you could then easily switch between to explore the different options in your next meeting.

If you are familiar with git, you might be wondering "Can I also merge the content of a branch into another one?". The answer is yes, but currently that can only happen inside one of the AEC software for which we have connectors. The merged data can then be re-sent to an existing or new branch.

Commits are a bit like a "save" of the most current version of your data - a point in time where you have "committed" your changes. They allow you to track the changes in your stream and easily see who changed what and when.

Each time you send data, you are automatically creating a new commit which contains all the objects in your stream along with additional information such as the time, date, and author of the commit. The author of a commit can optionally add a commit message which is a short description of what they've done and what has changed. Like a stream, each commit is assigned a generated commitId which can be used to identify and retrieve it. You can go back in time and look at the history of your stream through the series of commits.

It's important to note that commits are immutable, you can change their message but not their content. Sent the wrong data? No problem simply send the correct one once again and the new commit will take over.

If you have used a connector and you've sent data to a stream, you've already used them! Each time data is sent to a stream, a commit is created. To help you keep track of the changes in your stream, it is a good idea to add a commit message that succinctly describes what the commit contains. Some of the connectors pre-populate a default commit message for you, but you are still free to write your own to add more detail.

When receiving data in a connector, you have the option of either staying synced with the latest commit or receiving a specific commit based on the commitId. If you choose to stay on the latest commit, you'll see a notification when someone else has sent new data to the stream. When you see this, you'll be able to use the receive function to get the new commit and update your file.

The Base object is probably not something you'll have to deal with directly when you're just getting started with Speckle. However, it is a helpful concept to be aware of if you want to get into creating custom Speckle objects, working on your own conversions, or building scripts or apps on top of Speckle.

The Base object is the building block of Speckle data. It is a dynamic object that is the "base" of all other Speckle objects. The Base and other objects that inherit from it have a combination of pre-defined properties (eg id, speckle_type, units) and dynamic properties which can be added on the fly. Property values can also be other Base objects such as a RevitColumn containing a Line representing its base line.

An key feature of the Base object is decomposition. This allows you to flag properties as detachable so they exist outside of the parent Base object and can be stored and retrieved separately. As a simplistic example, say you have several Beam and Wall elements that all want to reference the same Level. Instead of creating multiple copies of this Level and storing it within each of the Beam and Wall objects, you would instead make the Level detachable in the Beams and Walls. This allows all the objects to reference the same Level which is stored once individually.

When using the connectors to send existing data, you won't really need to think about the Base object as all this is taken care of for you behind the scenes. The objects in your model are converted to Speckle Base objects and then are nested within a parent Base object to create the commit - all when you press the "Send" button.

If you are getting into creating your own Base objects, our The Base Object section and the Decomposition API are a great way to get started.