The Speckle node package is not available from Dynamo's Package Manager. For installation instructions, see the section below.

Prefer watching to reading? Who doesn't!

Check out our dedicated tutorial on how to get started with Dynamo (opens new window)!

Once installed, the Dynamo Connector will appear as a node package in your library as Speckle 2.

The Speckle 2 package contains the main nodes necessary to use Speckle within Dynamo, including nodes for sending and receiving data, managing streams and selecting accounts.

We've also built a few nodes for more advanced use cases, as well as some handy tools for Speckle developers/hackers (these are found in the Developer Tools sub-section of the package).

Speckle Streams are identified by their URLs. Across our Dynamo and Grasshopper connectors you'll see URLs in 3 different formats:

Unsure about what commits and branches are? No worries, you don't need to know what they are to use Speckle! But if you're curious, you can read about them in Core Concepts.

Let's look at how we would send some data in Dynamo. First, start by creating a new Send Data node.

In order to select which stream to send data to, you just need to pass a stream URL to the streamUrl port. 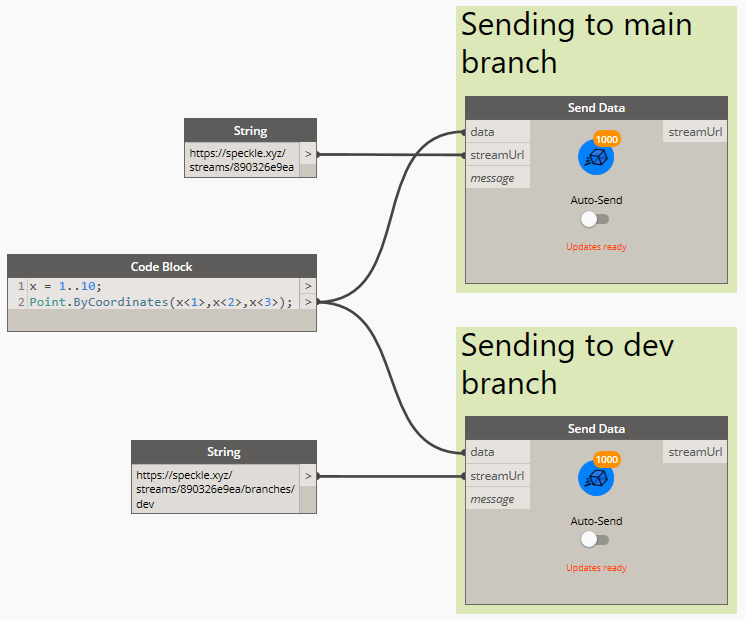 You cannot send data to a specific commit. Commits are a snapshot of data at a specific point in time and therefore cannot be edited.

In order to select which objects to should be sent to your stream, you just need to connect the desired data to the data input in the Send Data node. The node will automatically convert any supported Dynamo objects into a Speckle-compatible format.

Although optional, it's considered good practice to add a "commit message" whenever you send you data (especially if working with others). This message should describe the changes being pushed. You can add a commit message by passing any string to the message port. The commit message will be visible in the Speckle Web App (where you will also be able to edit it).

With a Stream URL and some data to send, the only thing left to do is to press the Send button. This will begin the process of translating your data to Speckle's object model and uploading it to your Speckle server.

To view the sent stream online you can just right click on the sender node:

# Sending to a Specific Branch

To send to a specific branch, simply use the branch URL, such as: https://speckle.xyz/streams/3073b96e86/branches/dev.

Receiving data is very simple, you just need a Receive Data node, and a stream URL.

By using the toggle on the node, you can enable/disable auto receiving. If enabled, new data pushed to this stream will be pulled automatically as it's available.

When using a stream URL, the main branch is used to send and receive data by default.

You can also receive data from a specific branch; simply use the branch URL, such as: https://speckle.xyz/streams/3073b96e86/branches/dev.

We've already seen how to retrieve data from streams and branches. It's possible to go even deeper, retrieving data from specific commits. To do this, simply use the commit URL, such as: https://speckle.xyz/streams/3073b96e86/commits/604bea8cc6

When receiving from a commit, the node will stop showing notifications about new activity and the auto-receive toggle will be disabled. This is because commits cannot be edited.

Like commits, objects in a commit cannot be edited, so the data received using such a URL will always be consistent. You can find the ID of an object from the Speckle Web interface: 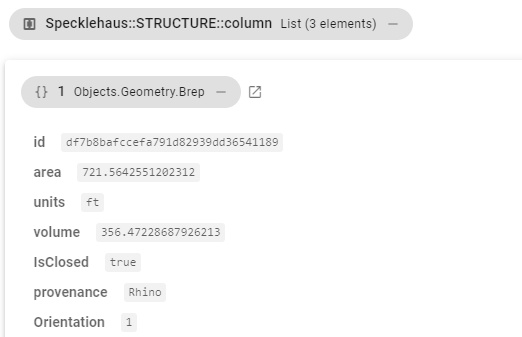 To view the received stream online you can just right-click on the receiver node:

A Custom Object is a Base Object with custom properties assigned to it. It's basically a custom data structure you can create to send data in a specific format that you define.

In Dynamo, we use dictionaries to represent custom objects since they are natively supported, so creating custom objects is as simple as creating a dictionary containing the keys and values you wish to include in the Base object.

This dictionary will be automatically converted to a Base object during the Send operation.

Learn more about the Speckle Base object here 👈

The Send Data node performs sending operations. Data is usually sent to a Speckle Server, but the node also supports sending to a different data storage using transports. Whenever possible, the Send node will try to convert any compatible objects into Speckle format.

There is also an switch you can toggle to enable the node to send automatically the data whenever it changes. 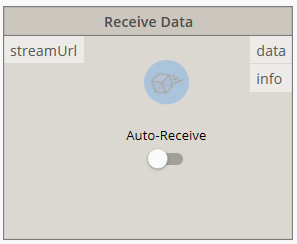 The Receive Data node fetches data from a specified Stream or any other valid Transport. Whenever possible, the receiver node will try to convert all Speckle objects into compatible objects.

The Receive Local Data node performs receive operations in the same way as the Receive Data node, the only difference is that data is received locally from the Speckle's user local database, instead of the server or any other transport.

Accounts must be set-up in your computer using the Speckle Manager.

To create a new stream, right-click on the canvas and search for the Create Stream node. This node has a custom UI that allows you to select a specific account to use, and a button to confirm the stream creation.

You can also create streams online form Speckle Web. From there you can also set their name, description and permissions.

Once created, the node will remember that stream. Meaning you will not be able to change the stream you created, or create a new one using the same node (to do this, just place a new Create Stream node).

Select the appropriate account and press the blue button. If the stream creation was successful, the output of the node should be a stream url pointing to the newly created stream and linked to the specified account.

To view the newly-created stream online you can just right click on the node: 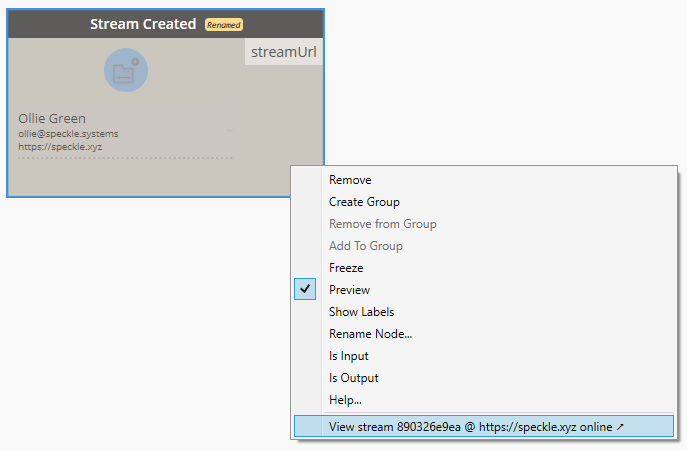 This node has no inputs.

The List Streams node returns a specified amount of streams available in an account. For performance reasons, it has been limited to fetching a maximum of 20 streams.

The Update Stream node allows for updating a stream's name, its description and whether it is public (publicly available to read by anyone with the stream url) or private (only invited collaborators can view this stream).

These nodes were developed exclusively for testing/development purposes. If you don't know what these are, you most likely won't ever need them.

The Convert to Speckle node will convert any supported objects (such as lines, curves, meshes...) into Speckle ones.

This node was developed for testing/development purposes, as the Send/Receive nodes will already perform this conversion step automatically.

The Convert to Native node will convert any supported Speckle objects into compatible objects.

The Serialize to JSON node will convert any Speckle object into JSON formatted text.